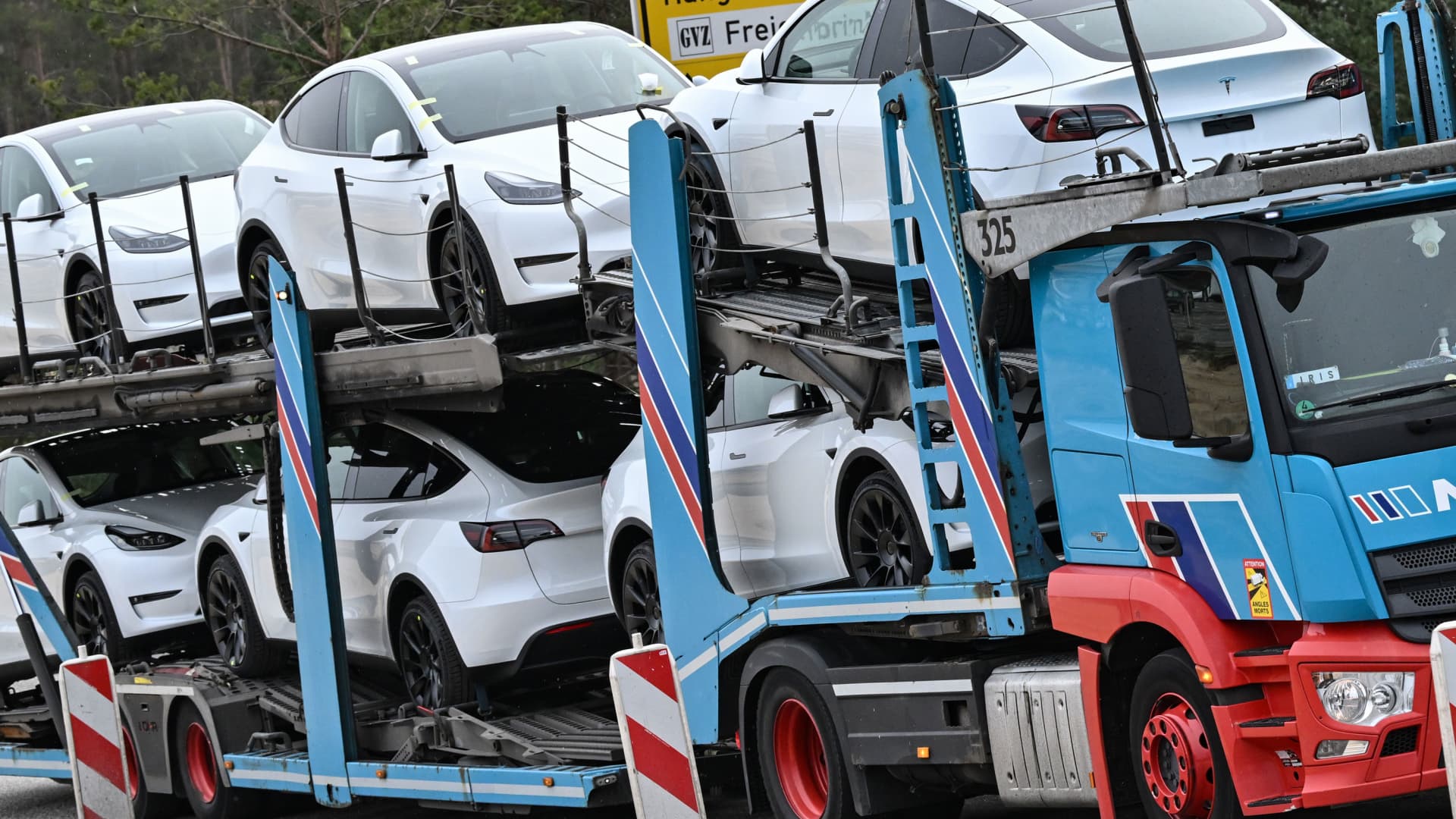 New Model Y electric vehicles are picked up by a truck from the Tesla Gigafactory Berlin-Brandenburg plant by US electric carmaker Tesla. Tesla says it currently employs more than 7000 people at its Grünheide plant.

Shares of Tesla dropped 14% on Tuesday, a day after the electric auto maker reported fourth-quarter vehicle production and delivery numbers for 2022.

According to a consensus of analysts’ estimates compiled by FactSet, as of Dec. 31, 2022, Wall Street was expecting Tesla to report around 427,000 deliveries for the final quarter of the year. Estimates updated in December, and included in the FactSet consensus, ranged from 409,000 to 433,000.

Those more recent estimates were in line with a company-compiled consensus distributed by Tesla investor relations Vice President Martin Viecha.

Some Wall Street analysts think Tesla’s deliveries miss spells trouble for the electric vehicle maker, but others see a buying opportunity for the company in 2023.

Baird analyst Ben Kallo, who recently named Tesla a top pick for 2023, maintained an outperform rating and said he would remain a buyer of the stock ahead of the company’s earnings report, which is scheduled for Jan. 25.

“Q4 deliveries missed consensus but beat our estimates,” he said in a Tuesday note. “Importantly, production increased ~20% q/q which we expect to continue into 2023 as gigafactories in Berlin and Austin continue to ramp.”

Analysts at Goldman Sachs said they consider the delivery report to be an “incremental negative,” and view Tesla as a company that is “well positioned for long-term growth.” Goldman reiterated its buy rating on the stock in a Monday note and said that making vehicles more affordable in a challenging macroeconomic environment will be a “key driver of growth.”

“We believe key debates from here will be on whether vehicle deliveries can reaccelerate, margins and Tesla’s brand,” the analysts said.

Shares of Tesla suffered an extreme yearlong sell-off in 2022, prompting CEO Musk to tell employees in late December not to be “too bothered by stock market craziness.”

Musk has blamed Tesla’s declining share price in part on rising interest rates. But critics point to his rocky $44 billion Twitter takeover as a bigger culprit for the slide.

Morgan Stanley analysts said they think the company’s share price weakness is a “window of opportunity to buy.”

“Between a worsening macro backdrop, record high unaffordability, and increasing competition, there are hurdles for all auto companies to overcome in the year ahead,” they said in a note Tuesday. “However, within this backdrop we believe TSLA has the potential to widen its lead in the EV race, as it leverages its cost and scale advantages to further itself from the competition.”

— CNBC’s Lora Kolodny and Michael Bloom contributed to this report.